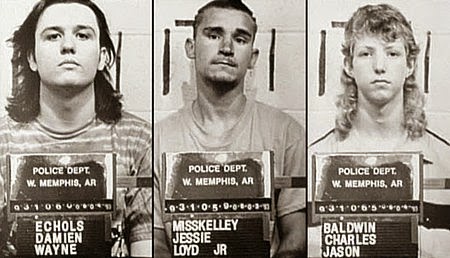 The West Memphis Three are three men who were tried and convicted as teenagers in 1994 of the 1993 murders of three boys in West Memphis, Arkansas. Damien Echols was sentenced to death, Jessie Misskelley, Jr. was sentenced to life imprisonment plus two 20-year sentences, and Jason Baldwin was sentenced to life imprisonment. During the trial, the prosecution asserted that the children were killed as part of a satanic ritual. A number of documentaries have been based on the case, and celebrities and musicians have held fund raisers in the belief that they are innocent

Author of Abomination: Devil Worship and Deception in the West Memphis Three Murders and Prophet of Evil: Aleister Crowley, 9/11 and the New World Order

Fred J Walsh
NY resident, born, raised, schooled, and currently residing. Armchair observer/follower/researcher of the case since about 2005, with no personal connection to the case. (Through my vocal online stance, I've inevitably made acquaintance of a few of the family members online; but I'm for all intents and purposes an outside case observer.) My handle on FB is Fred J Walsh, but it's a pseudonym created to discuss the case


Adam Galvan
Freelance blogger, who's written articles on the Prague Revue. Friends with a true crime author who got me the Prague Revue gig. He's published one book so far entitled Zug Island and is working on a book on the John Norman Collins case.

Zug Island: A Detroit Riot Novel: Gregory A. Fournier: 9781604945850: Amazon.com: Books
http://thewm3revelations.wordpress.com/author/wm3revelations/
Listeners are welcome to call in or ask questions in the chat room:
http://www.freedomslips.com/newchat/live.htm