Stephen Jimenez : The Book of Matt: Hidden Truths About the Murder of Matthew Shepard

Stephen Jimenez : The Book of Matt: Hidden Truths About the Murder of Matthew Shepard 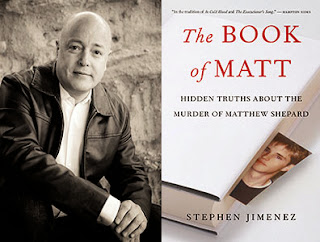 “Stephen Jimenez is an award-winning journalist, writer and producer. He is a 2012 Norman Mailer Nonfiction Fellow and has written and produced programs for ABC News 20/20, Dan Rather Reports, Nova, Fox, Court TV and others. His accolades include the Writers Guild of America Award, the Mongerson Award for Investigative Reporting (Northwestern University Medill School of Journalism), an Emmy, and several fellowships at the Ucross Foundation in Wyoming. A graduate of Georgetown University, he has taught screenwriting at New York University’s Tisch School of the Arts and other colleges. Jimenez lives in Brooklyn, New York.”


What role did crystal meth and other previously under reported factors play in the brutal murder of gay college student Matthew Shepard? The Book of Matt is a page-turning cautionary tale that humanizes and de-mythologizes Matthew while following the evidence where it leads, without regard to the politics that have long attended this American tragedy.


Posted by EmailRevealer.com at 1:49 PM