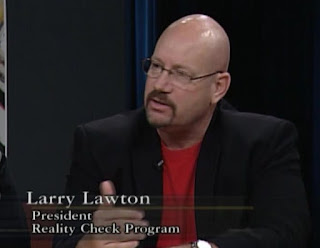 Larry Lawton spent 11 years in some of the toughest federal prisons in the United States. He was convicted of racketeering in connection with jewelry robberies. While in prison Lawton saw inmates stabbed and friends die. He saw young men raped and turned out as prostitutes for other inmates.  Lawton was stabbed and stabbed others. He studied to be a paralegal and became a gang mediator; he somehow kept his sanity by helping other inmates. Upon his release from prison, Larry developed the nationally recognized Reality Check Program to help young people NOT go to prison.

Larry is a guest TV analyst for networks like, MSNBC, NBC, FOX, CNN, ABC, CBS. Larry is a certified paralegal, court program developer, police adviser and teen and young adult issues expert for families all over the country.
Larry Lawton co-authored Gangster Redemption with 8 time NY Times bestselling author Peter Golenbock, the book is Larry's life story, what REALLY goes on in prison and how Larry developed the #1 Program in the country helping young people NOT go to prison.

Posted by EmailRevealer.com at 11:29 AM