John Potash is the author of The FBI War on Tupac Shakur and Black Leaders: U.S. Intelligence’s Murderous Targeting of Tupac, MLK, Malcolm, Panthers, Hendrix, Marley, Rappers and Linked Ethnic Leftists. He did graduate studies at Columbia University. He discussed his book on dozens of radio stations nationwide and was featured on CSPAN3’s American History TV earlier this year.

His upcoming book, available for preview and preorder on Amazon, is Drugs as Weapons Against Us: The CIA’s Murderous Targeting of SDS, Panthers, Hendrix, Lennon, Cobain, Tupac and other Leftists. This book will be released in early November on Trine Day Press. 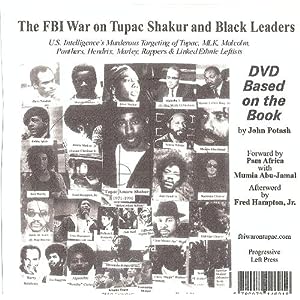 The FBI War on Tupac Shakur and Black Leaders contains a wealth of names, dates and events detailing the use of COINTELPRO style tactics by the FBI against a generation of leftist political leaders and leftist musicians. Based on 12 years of research and includes over 1,000 endnotes. Sources include over 100 interviews, FOIA-released CIA and FBI documents, court transcripts, and many mainstream media outlets. Book is 192 pages of main text, 100 pages of endnotes, 8 pages of photos (incl. government/court documents) and some more pages of preface, foreword, afterword, and bios.

Posted by EmailRevealer.com at 12:32 PM