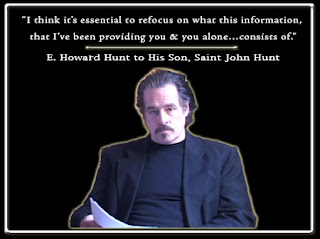 Saint John Hunt is the eldest son of "super-spy" E. Howard Hunt, a 27-year career C.I.A. covert agent and Foreign Station Chief, most well-known as the Leader / Director of the White House "plumbers" black bag team, who's botched burglary & arrest led to the impeachment & resignation of then President Richard Nixon.

E. Howard Hunt, who passed away in January at the age of 88, was also involved in many of the C.I.A.'s most nefarious operations in Cuba and throughout Central & South America, including but not limited to the assassination of Che Guevara, assassination of Allende and coup in Chile, the coup in Guatemala, the orchestration of the Bay of Pigs, and plots to assassinate Fidel Castro.
He is considered by many investigators to be one of the 3 "tramps" intercepted, detained, photographed and released without arrest or charges near the grassy knoll at the Dealy Plaza scene of the assassination of President John F. Kennedy.
Even more significant, Hunt had direct knowledge of the planning, particulars, participants and motives in the J.F.K assassination and has confided and entrusted this information and documentation to his son Saint John.
Following the Watergate debacle, Saint John's father was sentenced to and served 33 months in Federal prison.   Saint's mother Dorothy was killed in an extremely suspicious airplane "accident", while carrying a very large amount of cash to be distributed as hush money to co-conspirators and participants.
On the very night of the botched Watergate 'job', Saint John was awakened in the middle of the night and at his father's plea / direction, became an active participant in assisting his father in the disposal of potentially compromising / incriminating evidence from the bungled burglary.
Throughout his youth and into early adulthood, Saint John traveled worldwide, as his father pursued his duties as a covert C.I.A. operative. He was his father's proud son and trusted confidante.
Hunt's career as a savvy, sophisticated intellectual, yet tough-as-nails team leader & 'can do' covert operative, made him the perfect Hollywood spy "role model" for characters like television's Mission Impossible team leader "Mister Phelps" and the follow-up film series, featuring Tom Cruise as "Ethan Hunt", a thinly veiled reference to Everett Howard Hunt.
As the legendary spymaster (now age 88) lay in a Miami hospital bed, dying, his oldest son, Saint John Hunt sat in vigil at his bedside and shared his father's final days.
As both a loving, compassionate son and an experienced professional care-provider, Saint spent many hours over the course of those final days at his fathers deathbed-side, and has been entrusted with privileged information, documents, audio recordings and other revealing items & explosive evidence regarding the Kennedy assassination.
Saint John Hunt has been interviewed for a feature article on his father's life in the April 5, 2007 edition of "Rolling Stone" magazine, and also by the Los Angeles Times newspaper.

He has appeared as a guest with both Ian Punnet and George Noory on "Coast-toCoast AM", with Alex Jones on "Prison Planet", with CNN's Glen Beck, and other broadcast, on-line and print media. (See links below.)
Additionally he has recently been interviewed by Jim Moret for television's "Inside Edition" and is set to appear on an upcoming episode of CBS 60 Minutes.
Saint John Hunt's new book "Bond of Secrecy" is set for publishing and he has written a screenplay with Eric Hamburg (Screenwriter / Co-Producer with Oliver Stone on the feature film "Nixon") and is in negotiations for production of a feature film about his father's career, their life together and the dark secrets of the C.I.A.
In coming forward to discuss his father's career , their unique intimate personal relationship and their bond of secrecy, Saint John Hunt is hopeful that in revealing the in-depth information and evidence he has, he will help provide the critical missing pieces of the puzzle surrounding the Kennedy Assassination.
It is his deepest desire that these revelations will bring closure and light upon the darkest chapter of our nations history.   A darkness continuing to this very day, which imminently threatens our liberties and future as free Americans.

Posted by EmailRevealer.com at 10:55 AM No comments:


When 914 members of Peoples Temple and four visiting Americans died in Guyana, South America on November 18, 1978, Laura Johnston Kohl survived.  She was one of 87 who lived through the trauma.

After participating with the Black Panthers, and attending Woodstock, Laura moved into Peoples Temple in California in 1970, and was an active and enthusiastic member until the day it ended.  She moved to Guyana in March 1977.  She frequently traveled between Georgetown and Jonestown, a 24-hour boat ride, but moved into Jonestown in October 1978.  Laura’s survival was a fluke.
It took twenty years for Laura to rebuild her life and have the determination to research this tragedy.  The first ten years were spent in Synanon.  Then, she reunited with many of the other survivors to put the pieces together and to get some understanding.  After ten years she wrote her autobiography.


Today, Laura is a bilingual teacher, a member of ReadLocal San Diego, on the Speakers’ Bureau of The Jonestown Institute, a bilingual international speaker, a Quaker, and a Board Member of the Communal Studies Association.  She is interviewed often by national and international media, most recently the “Ben Modo Live” television program, and numerous radio/internet program.  Contact www.jonestownsurvivor.com to schedule talks.

Posted by EmailRevealer.com at 3:15 PM No comments: